The IEEE R10 Student Branch Award is given to a student branch that has maintained membership, provided student members with opportunities to volunteer, and helped in promotion of IEEE and its mission. IEEE R10 recognizes the role of the Student Branch in representing and fulfilling the needs of the members and the missions of R10 and IEEE. This award will help improve the membership, membership satisfaction and retention.

The purpose of this award is to identify the Student Branch that has conducted quality events, workshops, projects, etc. for the benefit of students.

Only one IEEE Student Branch in Region 10 will be selected for this award in the award’s year.

The winning Student Branch will receive an award plaque.

Point of Contacts for further information and enquires: 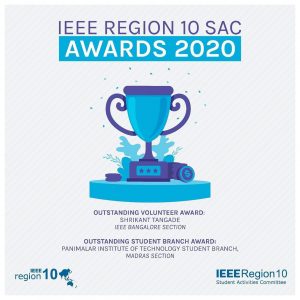